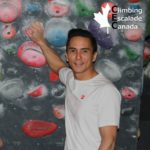 The Face…and Record of Canadian Climbing 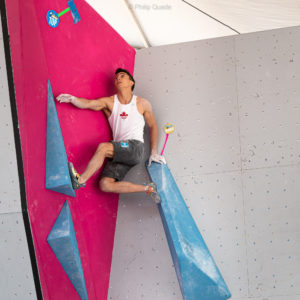 There are athletes who shy away from expectations: they try to detach from results, enjoy themselves and trust the process of their training. Sean McColl is an athlete who thrives on his expectations; he lives not only to train but to consistently succeed in those moments of high-pressure. I think it’s safe to say he also is still enjoying himself. As of February 2020, McColl has won 12 CEC Open National Titles, earned 34 World Cup medals, and is the only athlete in IFSC history to post a top-eight World Cup finish in each of the three climbing disciplines. To put it bluntly, one can’t talk about competition climbing in North America without talking about Sean McColl.

John Burgman, author of High Drama, the Rise, Fall and Rebirth of American Competition Climbing says,“If you peruse the results of elite events from, say, 2008ish, you’ll find names like Anna Stohr, Lisa Rands, Chris Sharma, Paul Robinson, Daniel Woods…They are all great legends, of course, but their acclaim in 2021 also comes with a sense of closure and comfortable conclusion—they have mostly moved on from the highest level of competition…that entire generation of competitors has. And yet, we still have Sean McColl—who is certainly part of that same generation—and still competing at the highest level. He is a legend and his Olympic berth proves that his [hallowed legendary status and his prime years] is just as good and capable as he ever has been”.

McColl was born in 1987 and began climbing at age 10. He competed at his first World Championships at 13, won five Youth World Titles and then moved on to the Open category, consistently placing in World Cups for lead and bouldering. Always with a smile, McColl gives candid interviews, runs skills clinics, speaks about his training to youth teams, and will even “unveil” new shoes for a sponsor like he did the Scarpa Drago in 2016. Despite the often-seen professionalism, McColl has a goofy side–his teammates will attest. Even fellow competitors will attest that he keeps the fun in climbing while even remaining patriotic (Team Canada scarves aren’t super necessary for trips to Red Rocks, but Sean makes sure to have one).

As an American journalist, Burgman explains McColl’s icon status as a Canadian saying “Frankly, there are a lot of people here in the United States who are fans of Canadian climbing precisely because of Sean McColl. It’s hard to imagine any competitor who has been a more dignified and stalwart representative of his/her country, in that sense.”

There was a moment during the 2018 CEC Open Bouldering Nationals finals, hosted at Up the Bloc in Mississauga, Ontario, when fellow Canadian Allison Vest had a chance to win it all by topping her climb with her first or second attempt. As she turned to face her climb, the commentators Tyler Norton and Pete Woods fleshed out her current standing and her scoring possibilities; the stage was set for her to claim gold and it was tense. Suddenly, off the centre of the screen while Vest was slowly working through the second move, Sean McColl flew through the air on what looked like a descending, 3-part, one armed dynamic combination that had the crowd absolutely erupt. The emcee of the event stood between the two climbers dumbfounded on whether to watch Vest’s finish or to see if McColl had more. The “triple” that McColl executed had not been done by any other male competitors on that climb. On the replay, you knew he was committed to the jump and you could see in his body language he was psyched to have done the movement precisely how the setters intended. It was a moment that reminded you who you were watching and the fire he could ignite in a moment’s notice. What’s more about this moment is that McColl had a minor foot slip causing a fall and he began his second attempt on zero rest, doing the triple again and effortlessly topping the boulder on his way to yet another national championship (Vest topped and won hers in dramatic fashion as well; it was quite a special few moments).

One could spend days finding moments like these over the course of McColl’s career. National Chief Route Setter for Canada Kaleb Thomas takes credit for the tricky boulders of the CEC 2018 Bouldering finals. “It’s been important to have that benchmark of the international level in our country. Somebody the climbers and setters can compare their training and work with; to know where we are in the big picture,” he says. “Sean’s presence definitely influences the way in which we set the route/boulders because you know there is someone In the field with an internationally competitive level. You can take a little more risk.”

After qualifying for the Olympics on a climb in Hachioji, Japan in 2019, McColl spoke of how putting himself into big, do-or-die moments is when he does best. “I was waiting in the back, I knew I was 20th, dead last, with one route between me and my Olympic dream… I thought to myself, “How many people even get this chance, to have only one route between them and a lifelong goal?” He jumped from 20th to 10th place after attempting that route and became the first Canadian to qualify for the Tokyo Olympics in climbing. “My former coach and lifelong mentor Mike Doyle says ‘If you’re not nervous, you don’t care enough about the competition.’”

A Big Stage That’s Not Climbing

As someone who takes his training very seriously, McColl also values cross-training and stoking his competitive fire. Habits matter and McColl has a habit of winning. In 2015 on an American Ninja Warrior show called USA vs The World, McColl showed viewers that Isaac Caldiero wasn’t the only climber that could impress on prime time TV as a “ninja.” McColl made a statement with his performance the year before but a moment came in 2015 on stage 3 where he reminded people that no amount of flame throwers, spotlights, commentator hyperbole or crowd noise was going to shake him.

After four minutes of basically all arm hangs on this stage, McColl was wise to look for a rest. He found it after an upside down jug haul and wedged his knees to the scaffolding of the course for a knee-bar. To climbers, this made complete sense; knee bars are fun and finding a place to rest isn’t something you ever pass up. To the commentators and a majority of the people watching, McColl was either showing off or somehow breaking a rule. It was great TV and even better when he finished that stage 45 seconds ahead of people and smiled at the end showing gratitude for the competition and proving again that he can turn it on when it matters (and still embody that Canadian kindness).

“Take a Deep Breath and Execute”

Another true Sean McColl moment came in 2014 at a unique, head-to-head style, free solo competition called Psicobloc. McColl stood victoriously, 55-feet above a pool, having defeated Daniel Woods for the second year in a row and the commentator said, “There was not anything unexpected that happened here tonight.” The climbers were bent-over catching their breath: they had been neck-to-neck the entire 45-second race throwing big dynamic moves that risked a painful flop into a pool. Woods even had a few inches advantage with his long reach. Despite all the suspense, McColl winning had actually seemed to bore the commentator. The man who was supposed to excite the crowd had seen McColl win so many times that he’d come to expect it, like many of us in the climbing world.

The Psicobloc Masters isn’t on any official competition schedule; there are no points accrued, no big sponsor contracts awarded to the winners or any TV coverage. But just like American Ninja Warrior and just like his solo training sessions at the Hive North Shore or sending the 5.14d route Dreamcatcher in his backyard in Squamish, McColl brings a consistent and calculated drive to push himself. “I’ve made lots of sacrifices along the way. Whenever I talk to anyone more wise than me, they always say never change anything about my path. There’s always years later to make money.”

Early bird registration now open for the 2022-2023 CEC Para-Climbing National Championships on December 10th and 11th at Climb Base 5, Coquitlam, BC! 🎉

Happy National Coaches Week! Thanks for all you do...

Happy National Coaches Week! Thanks for all you do for our athletes all across the country. #thankscoach
@sportcanada.en

As per the Qualification Pathways for the CEC ...

As per the Qualification Pathways for the CEC Senior National Championships, some athletes have now received an invitation to the National Events in November 2022 (boulder/lead) and February 2023 (speed).

The @ifsclimbing released, earlier this week, its ...

The @ifsclimbing released, earlier this week, its 2023 Competition Calendar. There will be 12 World Cups in 10 countries, including six events in each of the sport climbing discipline: bouldering speed and lead.