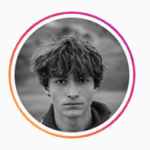 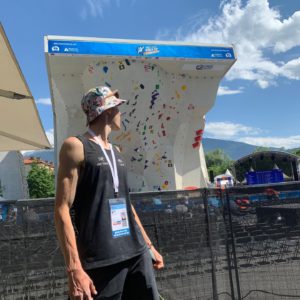 Before you read anything on Quebec-born Victor Baudrand as a climber, as a Canadian, or as a person, please read his “climbers guide to French Viennoiseries” instead. It’s seriously good. It illustrates what is truly top-of-mind for an 18-year old who happens to be in France in 2021: pastries and climbing. Baudrand’s drive to push his climbing has expanded to blogging with power rankings, pro tips and cultural insights, and we’re lucky he’s around to tell us what it’s like out there.

Something else Baudrand has done for us is travel a large portion of the planet before reaching adulthood. Baudrand was born in Quebec City to one Canadian parent and one French parent, and has lived in Thailand, Africa and now Utah since 2011. Fortunately, he has chosen Canada to put on his climbing jersey for the time being. With gyms having been a family activity from day one, he and his younger brother Oscar (also in the HPP) took to competing rather quickly. His coach and friend Palmer Larsen from Momentum Climbing in Utah says, “From the very start, Victor was a fiery athlete. His ambition and effort were unmatched at practice and in his climbing. The back and forth between him and Oscar was incredibly motivating but also posed unique challenges and growth opportunities.”

At age 11, Baudrand’s second competitive year with Momentum was a big one. Not only did he go to the massive Stone Summit facility in Atlanta, Georgia to climb with 400 other youth climbers, but he finished second in the country at the Sport Climbing Series (SCS). There is a highlight reel of this competition. At the 4:38 timestamp, with his feet cutting off the wall while nearing the top, Baudrand gives the final hold what looks like a tightness test before roaring victoriously at having topped the climb. Watching any climber this excited is awesome, especially D-category kids at nationals.

As can be the case with young competitors, life can change their relationship with the sport. Baudrand’s family moved back to Africa in 2014 and he became a 12-year-old who enjoyed surfing. It wasn’t exactly cross-training. He says, “When I came back, I was out of climbing-shape and it was hard on my ego to not be at the top anymore. I wondered if I belonged there. I even thought about quitting.”

The taste of success having stood on the nationals podium in Georgia was still fresh; a competitive climbing spirit doesn’t just disappear. Baudrand stuck with it, found new motivations for climbing and although didn’t reappear on the SCS podium, he managed to reignite some fire for climbing by heading outside. A few years later, he made finals at Youth Worlds two out of the three years that he was eligible and excelled in both the boulder and lead climbing disciplines.

Gains Come From Many Places

Indoor and outdoor climbing, although different sides of the same coin, both thrive on community. You can’t send hard climbs by yourself and Baudrand is someone who knew this early. He, Allison Vest, Sean Faulkner and his brother Oscar formed the “KanadaSouth” collective of climbers, typically pushing limits on real rocks. Baudrand says that as Canadian National athletes who all live in Utah and train together, they wanted to call their group something fun that would also reinforce their identity. “The K in Kanada represents the fact that we are not really based in Canada and we are a little bit of outsiders.” These outsiders have generated hundreds of followers online with hard send attempts, laughable nutrition habits and candid shots at the crag that echo the ethos of some early-days Dosage or Sender films. KandaSouth’s audience isn’t massive (yet) but any climber will tell you how much that positivity matters for big projects.

Even as an escape from the plastic and fiberglass of indoors, outdoor climbing can also help a climber recapture both the joy and progression of the sport. Baudrand says, “I think it [outdoor climbing] not only reinforces pure physical climbing strength, but also helps with mental fortitude. Acknowledging not just the risk factor, but handling pressure and the ability to persevere through hard moves are huge benefits of climbing outside.”

Baudrand’s Coach at Momentum, Palmer Larsen, was only 16 when he met Baudrand. They started working together in 2011. A coaching fixture on the US competitive scene, Larsen is also no slouch on real rock in Utah and elsewhere, in 2020 sending the 5.14d route Algorithm in Idaho. Speaking of the dynamics between climbers of very opposite styles while working this route, Larsen says, “Victor has an incredible fight and determination to his climbing that benefits you a lot in competition and in training but can be strategically hindering for outdoor climbing. Through working this climb, we both dealt with the inner demons of self-doubt and struggle. We bonded over the frigid temps, car dinners, and hours driving to something you obsess about for months.”

Although not getting the ascent in Idaho himself, Baudrand did climb hard alongside his coach, engaging “low gear”, a phrase they coined at Youth World Championships in 2017. Seemingly referring more to a mindset change than a physical one, Larsen says he uses this phrase to describe Victor when he “really buckles down and deals with uncomfortable movements, pushing through training, and improving.” Drawing on a whole lot of failure and learning as well, Baudrand using low gear is basically when he’s about to fall–when the pump kicks in, feet cut off the wall and you think he’s done. “Victor turns this on and does some truly incredible climbing following those moments,” says Larsen.

But Back to Pastry…

On his blog for life in France, Baudrand says, “Sadly, there is a chance that by the time you test all of the different types of viennoiseries, your athletic performance might not be able to keep up with the crème, sugar, and butter you have ingested. So I propose you let me do it for you.” I chuckled but couldn’t help connect this with some of the insight from Coach Larsen on the intricacies of coaching Baudrand. A beautiful and complex French pastry can be photographed, inhaled and then forgotten in a few seconds. Or, you can acknowledge all the parts that give them their notoriety: the process, the yeast, the flour, the water, and begin to savor and appreciate them. Baudrand takes the latter path and has benefited greatly from a discerning mindset that connects to his efforts on walls and rocks. He told me, “It’s a difficult leap of faith you have to make every time to test something new in life, training or climbing, but you never know until you try.” For such a young person, Baudrand has certainly tried a lot and pastries or not, his progression will continue to benefit from such a mindful approach to climbing.

Early bird registration now open for the 2022-2023 CEC Para-Climbing National Championships on December 10th and 11th at Climb Base 5, Coquitlam, BC! 🎉

Happy National Coaches Week! Thanks for all you do...

Happy National Coaches Week! Thanks for all you do for our athletes all across the country. #thankscoach
@sportcanada.en

As per the Qualification Pathways for the CEC ...

As per the Qualification Pathways for the CEC Senior National Championships, some athletes have now received an invitation to the National Events in November 2022 (boulder/lead) and February 2023 (speed).

The @ifsclimbing released, earlier this week, its ...

The @ifsclimbing released, earlier this week, its 2023 Competition Calendar. There will be 12 World Cups in 10 countries, including six events in each of the sport climbing discipline: bouldering speed and lead.